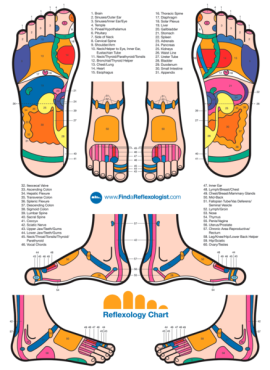 Reflexology is a holistic, deeply relaxing yet stimulating complementary therapy treatment dealing with the principles that there are 'Reflex Areas' in the hands & feet which correspond to all the organs, systems, glands & parts of the body. Stimulating these reflexes can help maintain the body's physical and psychological equilibrium. The hands and feet are used as a 'map' or 'mirror' of the body and by manipulating & applying pressure to certain points the body can be re-tuned.

It uses a unique method of techniques with the hands & thumbs to:

ELM is qualified in ADVANCED REFLEXOLOGY which includes extra knowledge & techniques such as: 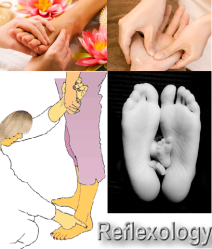 Reflexology is said to have been practiced from 2330BC in countries such as Egypt, China, Greece, Japan and India as a method of maintaining physical, mental and spiritual balance.

Dr Fitzgerald; an American ENT physician discovered the relation between points affecting other areas of the body linking to energy meridians, acupuncture and acupressure points. He also invented the ten longitudinal reflex zones of the body which form a key part of this amazing treatment today. Eunice Ingham was the person who formed the reflexology charts and techniques which are used by therapists.

I thoroughly hope you

with ELM and appreciate

on our Testimonial page!

Follow ELM on socials by clicking on the icons below! 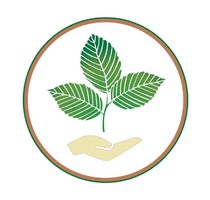